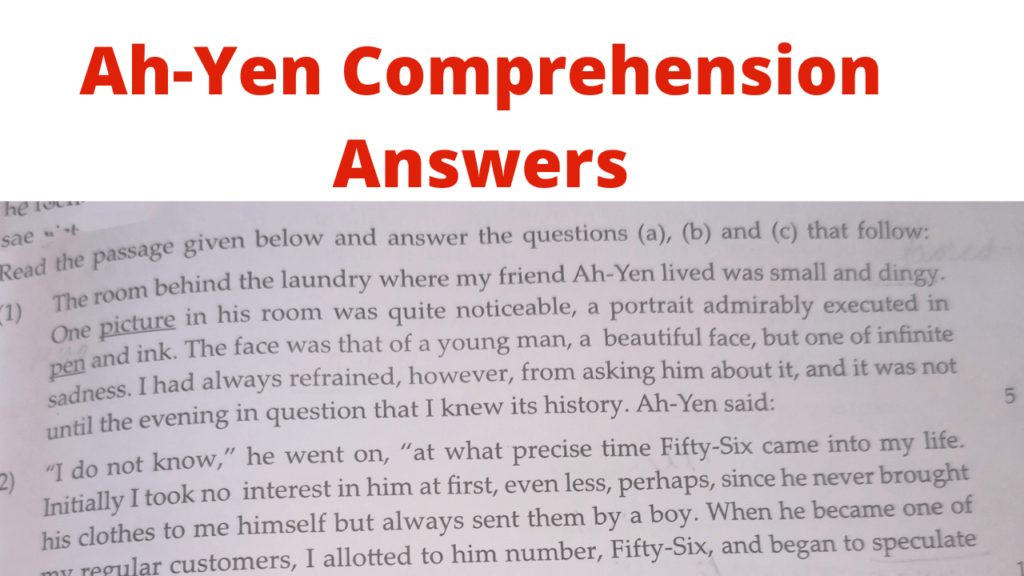 Read the passage given below and answer the questions (a), (b) and (c) that follows:

(1) The room behind the laundry where my friend Ah-Yen lived was small and dingy. One picture in his room was quite noticeable, a portrait admirably executed in pen and ink. The face was that of a young man, a beautiful face, but one of infinite sadness. I had always refrained, however, from asking him about it, and it was not until the evening in question that I knew its history. Ah-Yen said:

(2) “I do not know,” he went on, “at what precise time Fifty-Six came into my life. Initially I took interest in him at first, even less, perhaps, since he never brought his clothes to me himself but always sent them by a boy. When he became one of my regular customers, I allotted to him number, Fifty-Six, and began to speculate as to who and what he was.”

(3)”When I first knew him,” Ah-Yen went on, “Fifty-Six was a student at the university. I inferred it from his absence from town during the four summer months, and from the fact that during the time of the university examinations the cuffs of his shirts came to me covered with dates, formulas, and propositions in geometry.”

(4)”In the following winter the habit of wiping his pen upon his handkerchief, which I had seen during his final examination, became chronic with him, and I knew that he had entered upon the study of law. He worked hard during that year, and dress shirts almost disappeared from his weekly bundle. It was in the following winter, the second year of his legal studies, that the tragedy of his life began. I became aware that a change had come over his laundry; from one, or at most two a week, his dress shirts rose to four, and silk handkerchiefs began to replace his linen ones.”

(5) “It dawned upon me that Fifty-Six was abandoning the rigorous tenor of his student life and was in love. When the bright days of summer were fading into autumn, I 34 13-1 was grieved to notice an occasional quarrel+only four shirts instead of seven. Then one gloomy evening, I found on opening his bundle that he had bought a stock of celluloids, and my heart told me that she had abandoned him forever.”

(6) “Then came an agonising interval of three weeks during which he sent me nothing, and after that came the last parcel that I ever received from him, an enormous bundle. In this, to my horror, I discovered one shirt, the breast of which was stained, a deep crimson with his blood.”

(7) “A fortnight before, I remembered having heard the street boys crying the news of an appalling suicide, and I know now that it must have been he. After the first shock of my grief had passed, I sought to keep him in my memory by drawing the portrait which hangs beside you. The picture is, of course, an ideal one, for, as you know, I never saw Fifty-Six.”

(8) On my way I mused much upon my friend and the sympathetic grasp of his imagination. But I did not want to shatter the airy castle of my friend’s fancy. And in the last bundle I sent, there was a tattered shirt that had been stained by the breaking of a bottle of red ink. As far as I remember until a year ago, when I transferred my laundry, my laundry number with Ah-Yen was Fifty-Six.

(a) (i) Given below are three words and phrases. Find the words which have a similar meaning in the passage

(ii) For each of the words given below ,write a sentence of at least ten words using the same word unchanged in form, but with a different meaning from that which it carries in the passage:

1.Picture(line 2) There was a beautiful picture of Mona Lisa in the museum.

3. Dates(line 14): When will your examination dates be released.

Answer. Fifty six was the university student who gave his clothes to Ah-Yen laundry for cleaning. He got his name when fifty six became his regular customer of Ah Yen. So, he allotted him this Fifty Six.

Answer. Ah-Yen was a student at the university because his clothes seized to laundry when there was a summer breaks but again started coming at the time of university examination. And at that time his shirts usually filled with dates, formulas, and propositions in geometry.

Answer. Ah-Yen concluded that Fifty Six was in love because his dress started coming four instead of seven and it can only happened if there was someone with him who clean up his clothes, and according to Ah-Yen that person is definitely his lover.